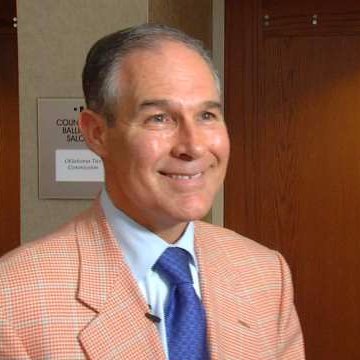 Ok, you know I had to.
Why he is unqualified:

Ok. Where do we begin? Scott Pruitt has an anti-environmental track record that is LONG and well-known. It's so well-known that when his nomination was announced, there was a collective groan amongst my colleagues, along with a lot of cursing over the fate of our environment/environmental issues.

Pruitt also has severe conflicts of interest, including issues with energy firms. He's also clearly a climate-change denier. EPA employees are trying to fight against him, but it's worrying that people are not showing the same amount of outrage as was DeVos. Pruitt also won't recuse himself from lawsuits that he's brought against the EPA.

The GOP is also hellbent on repealing Obama's environmental protection rules, which would only get worse with Pruitt as head of the EPA.

I'm going to be honest: I haven't been updating this one as often as I could, because I've been focusing on other votes. However, the full senate vote for Pruitt is: TOMORROW, FEBRUARY 17th. You want to call your SENATORS.

Our calls are especially important, because we're down TWO GOP SENATORS. KEEP CALLING.

For your Democratic senator:
Date:

I am writing to urge you to please vote NO for Scott Pruitt. He has a strong track record of working against the environment, and the Environmental Protection Agency, in particular. During his tenure as Oklaholma Attorney General, he initiated a record number of lawsuits against the EPA.

Scott Pruitt has also stated that he believes the issue of climate change to "not be settled", which is counter to what our federal agencies have stated. Given the GOP's continuous repeal of environmental protect rules formed under the Obama era, I'm concerned that our environment will suffer further under Pruitt.

I am writing to urge you to please vote NO for Scott Pruitt. He has a strong track record of working against the environment, and the Environmental Protection Agency, in particular.

We have made too much progress when it comes to cross-state pollution and greenhouse gas emissions, to turn back now. Scott Pruitt has given non-committal answers in these areas, and I'm concerned what will happen, should he become head of the EPA.

I kindly ask that you factor Mr. Pruitt's track record into your consideration of his nomination.

You: I'm calling to ask that [SENATOR] to please vote NO against Scott Pruitt for EPA.

You: He has a track record of being antagonistic to the EPA, including filing a record number of lawsuits against the agency himself. How can he serve an agency that he has sued?

You: Can I ask for [SENATOR] to vote no?

If so: Great, have a great day!
If not: I would strongly encourage [SENATOR] to reconsider. Thank you and have a good day.