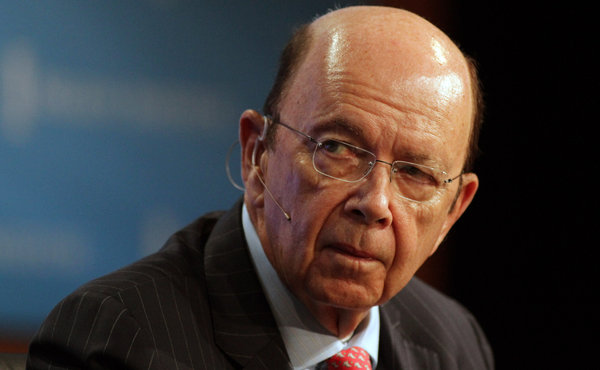 ​Cliffnotes:
Name: Wilbur Ross
Cabinet position: Secretary of Commerce
Net Worth: $2.9 billion
Pedigree: A former investment banker, Ross earned the nickname "the king of bankruptcy" for buying up distressed companies in declining industries like steel, coal and textiles and turning a profit. (Source)
His vote is: 2/28, 7:00 PM EST.
Your roll​: Telling Senators that you want them to vote NO.

So. Ross is exactly what you think he is. He has spent his entire career purchasing bankrupt businesses and flipping them for a profit. (In a nutshell: just think of all the people who bought foreclosed-on homes during the recession, and then flipped them for a profit. That's Ross, on a larger scale.)

He's also notorious for acquiring coal assets under  International Coal Group, which just happens to be the group that owned the Sago mine, where twelve miners died in 2006. While he may not have been directly responsible for the incident, the precedent just doesn't look great, especially when you look into the logistics of how the mine disaster occurred. Oh, and he totally fired one of his undocumented workers before his confirmation hearing.

While his predecessor is also a billionaire, Ross would be coming into this position with no government experience. And we should be concerned about that fact.

Also, he co-wrote this piece on trade deals with Peter Navarro, which - well. Just read it.  Also, if you need my thoughts on Peter Navarro, here you go.

In a nutshell, CNN wasn't exactly off when they
Some more videos on Ross, especially from his hearing.

I'm going to preface this by saying: yes, he will likely be confirmed. The Senate is currently split with a 52/48 split, and only 51 votes or a simple majority are needed to confirm the nominee. With that being said, it's important we still call anyway. We can't make this easy for the GOP.

Call script for your SENATORS:

You: Hello! My name is [name]. I'm calling from [zip code]. I am asking [senator name] to vote NO on Wilbur Ross.

​You: Ross may have extensive interest in the business sector, but has no government experience. He also has a history of profiting off of failed businesses, which sets a bad precedent for business and morale.

You: Can I ask whether [senator] to vote no?

If yes: Great!
If not: I strongly urge [elected] to reconsider. Thank you and have a good day!
Email/fax script:

I am asking that you vote NO for Wilbur Ross for Commerce. While he may be experienced in the business sector, he has no government position and is not qualified for this position