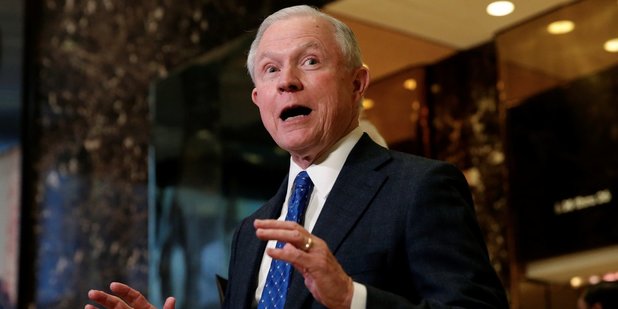 Well, this page revived itself rather quickly, did it not?

So you guys know the drill. Let's do a tiny bit of backtracking. I promise, it won't be as long as some of the other pages.

Between February 8th - March 1st: A whole lot of what you would basically expect, happens.

​March 1st: Washington Post releases a story, saying that Sessions has been in contact with Russian Ambassador Sergey Kislyak. The internet rightly explodes.

Ok, so Sessions is clearly as bad as we all thought. what do we do now?

We have a longer list of people to call/email/fax.
Optional:
We will be asking for:

I am writing to ask that you support a special prosecutor against Attorney General Jeff Sessions, for lying to Congress during his confirmation hearings. Claiming under oath that he has never met Russian Ambassador Kislyak,  is a violation of §1001 and §1621, and normally results in jail time. Even if AG Sessions claims that the omission was unintentional, this should still be investigated.

Finally, I am asking that you take a public stand against AG Sessions, and his conduct. Misleading Congress sets a questionable precedent, particularly from a public official.

I am writing to ask that the committee take a substantial look into both Attorney General's Sessions ties to Russia, and how his omission about communication with Kislyak - which is a violation of §1001 and §1621, and normally results in jail time. -  ties into ongoing questions about the Trump White House's ties with Russia.

I am also asking that the committee agree to a bipartisan investigation into the Trump's ties to the White House, and support an independent commission to investigate. There are many outstanding answers, and they're owed to the American people.

Call script: (Please personalize for your MoC and Senator)
You: Hello! My name is [name]. I'm calling from [zip code].

You: I'm calling to encourage [MoC/Senator] to please support the calls for a special prosecutor for AG Sessions. He violated §1001 and §1621, which normally results in jail time. Even if AG Sessions claims that the omission was unintentional, this should still be investigated.

You: I would like to also ask [MoC/Senator] support a bipartisan investigation/independent commission to investigate the Trump White House's ties with Russia.

You: The Sessions revelation indicates that there continue to be unanswered questions about Russia's involvement with our government, and I believe that the American people are owed answers.

You: Can I ask [MoC/Senator] support these requests?

If so: GREAT! Thanks and have a good day!
If not: I'd like to ask [MoC/Senator] please reconsider their position. Russia is a foreign, often hostile state and hard target, and their continue interference in our government is troubling, and alarming.

You: ​Thank you and have a good day.
To Senate/House intelligence: (You probably won't get solid answer from either committee, so you're calling w/ script that reflects as much):

You: I'm calling to encourage [committee] support the public's requests for an investigation into both Attorney General's Sessions ties to Russia, and how his omission about communication with Kislyak - which is a violation of §1001 and §1621, and normally results in jail time. -  ties into ongoing questions about the Trump White House's ties with Russia.

You: I would like to also ask [committee] support requests for an independent commission investigating the Trump White House's ties with Russia.

You: Thank you, and have a good day!

Why he is unqualified: It's impossible to get into Senator Session's entire record, as it spans several decades and several positions.

​However, start with this case.  A number of his colleagues have recently cited his precedent in this case, as a sign that he acts justly in the face of racis. But it remains unclear if that's the actual truth.

He's also faced streneous questions over his 1986 hearings to become a federal judge, where he was deemed too racist to sit on the bench. Again, he's claming the accusations were false, but they've continued to dog his career. Similarly, check out these five questions on his record.

There are also allegations of retaliation  after he lost the judgeship. He's also criticized the Black Lives Matter movement. He also hates immigration - including legal amnesty - and doesn't believe in climate change.  The Congressional Black Caucus is vigorously opposed to the appointment.  So is Senator Sherrod Brown (D-OH) after meeting with him.
​

After the confirmation hearing:

A LOT happened during the confirmation hearing, including:

Email draft: (Please personalize and cite examples from above. DO NOT SEND A FORM LETTER)

I am writing to ask that you please vote NO for Senator Sessions for Attorney General. While he has a long-serving track record in the Senate, I do have concerns about his qualifications for the specific position of AG.

He has an uneven track record when it comes to civil rights, particularly when it comes to voting rights and immigration rights. He has also demonstrated troubling answers when it comes to discrimination against women and  the LGBTQ community. He has also referred to Muslims, as a "toxic ideology". Please vet whether he is an acceptable nominee to serve as Attorney General for all Americans.

You: "Hello, my name is [name]. I'm a constituent calling from [zip code].

You: "I am calling to urge [elected name] to vote NO for Senator Sessions for Attorney General."

You: "I am calling to urge [elected] support their Senate Judiciary colleagues who are voting NO for Senator Session for Attorney General."

You: I have serious concerns over Senator Sessions's records in civil rights, particularly his track record on voting rights, immigration rights, and discrimination against women and members of the LGBTQ community.

If yes: Great!
If no: I would like to strongly encourage [rep name] to consider otherwise.